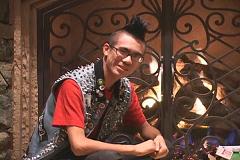 I started this show because I've always wanted to find new punk rock bands that sound awesome but at the time, there weren't very many places where I could find them. Most of the stations that exist back then and today played mainly familiar bands with familiar songs. After listening to the same bands and same songs over and over, I got tired of it and wanted to do something about it. That's when I started a radio station of my own and made "The Punk Rock Demonstration". I started the station around December 2005 and back then, it was a 30 minute punk rock show recorded on cassette tapes and transfered to the internet to be broadcast. The quality is much better now with digital recording and is now up to broadcast standards. After 3 years of doing this, people from all over the world have come to the website to find bands and music that they would have never found otherwise.

I'm hoping to expand my radio station and radio show to be more than just another radio show. The website https://www.punkrockdemo.com will soon have a video collection of punk rock shows of many undiscovered and legendary punk rock bands that you would have never seen if you weren't at the show. There are also many useful tools on the site to help everyone satisfy their punk rock urges. Best of all, if you're looking for a place to host your website, we do that too. Just visit https://www.punkrockdemo.com and hopefully you will find everything you need to find related to punk rock and maybe some other things, such as a punk rock documentary of punk rock after the year 2000 and a place to "hang out" with other punk rockers and punk rock bands. I believe that if punk rock music stays the same, it will die, so my goal is to show the world that it's not stuck in 1977, but is moving forward!

And some stuff about me....

I grew up in Los Angeles, California, USA. I'm the host of the radio show "The Punk Rock Demonstration". I broadcast the shows on my own radio station. I have interviewed many punk rock bands (old and new) and occasionally do booking. I am very involved with the punk rock community and you can probably find me at many of the punk rock shows.

I was the former band manager for the band Infected Youth and Defied.